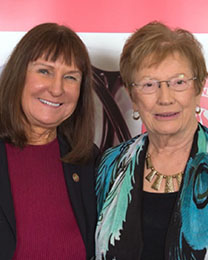 Mary Ann Watkins is a 1962 graduate of Mennonite Hospital School of Nursing and received her Bachelor of Science and Master of Science degrees from Illinois State University. She served as the Student Health Nurse at Mennonite Hospital School of Nursing from 1967-1969 and Director of Student Services from 1969-1983. In 1983 she was appointed as Director of Admissions and Financial Aid at Mennonite College of Nursing. Her responsibilities in this role included: directing the image of the college communications to identified target groups through the Recruitment Program, directing the program for admission of students, directing the Financial Aid Program, awarding financial aid funds in accordance with institutional, state and federal guidelines, and serving as a member of the College’s Administrative Council. Mrs. Watkins spearheaded the development and implementation of a highly successful Student Ambassador Program, which provided outstanding student leaders to assist with recruitment opportunities. She was instrumental in the establishment of the Presidential Scholarship, which provided full tuition for the selected student, and the Academic Scholarships, which provided $1,000 to students who entered the College with a grade point average of 3.5 or above for the pre-admission lower division coursework. In July 1999 she transitioned with the College to Illinois State University and was employed there until September 2000.

After leaving Illinois State University, she served as Director of Development at Maple Lawn Homes in Eureka, Illinois, and at Meadows Mennonite Retirement Community in Meadows, Illinois, and Normal, Illinois, retiring in 2013.

Gail A. Lamb began her work at Mennonite Hospital School of Nursing in 1978 in the role of Counselor for students. At that time, she held a Bachelor of Science in Education degree from Bridgewater State University and a Master of Arts degree in Human Relations from Ohio University.

During her tenure at MCN, she served as Counselor, then Director of Counseling Services, then Director of Student Affairs, and finally as Director of Student Affairs and Public Relations programs. As a faculty member, she created and taught the courses in the Personal Growth Series, which became Human Relations courses when the diploma program transitioned into the college program. She provided leadership for the Residence Hall program and the Transcultural Nursing program for many years. When she took on the role of Public Relations, she worked closely with area media to publicize the variety of good works happening at Mennonite College of Nursing and to inform the community of the many sources of excellence offered by the leadership, the faculty, and the students at the College. When the faculty were encouraged to further their education, she went on to earn her Ed.D degree in Higher Education from Illinois State University. She earned the rank of Associate Professor of Human Relations in 1997. In July 1999, she transitioned with the College to Illinois State University, serving for one year as the Director of Development for MCN. Subsequently, she changed positions to become the Director of Development for the College of Education and the Laboratory Schools at ISU, and retired as the Senior Director of Development in that role in 2013.

Mrs. Watkins and Dr. Lamb each served in a variety of membership and leadership capacities in professional and community organizations during their tenure with the College and beyond. They each also earned several significant honors. Watkins was honored in October 1996 by the Midwest Association of Financial Aid Administrators with a Recognition Award for her 25 years of service in financial aid. In 1997 she received the ILASFAA Sustained Service Award in recognition of long-term and notable service to colleagues and students in the State of Illinois. In the same year she received the Distinguished Alumni Award from Mennonite Nurses’ Alumni Association. Lamb was honored in June, 1999 when the MCN faculty and administration presented her with her own MCN nursing pin, naming her an honorary member of the MCN Alumni Association. In 2010, she received the U-High Friend of the Year Award, an honor given to non U-High Alumni for exemplary service. In 2012, she received the Illinois State University Administrative Professional Council Distinguished Service Award. In 2013, she received the Distinguished Service Award from the Educational Administration and Foundations Department at ISU, and the College of Education Outstanding Service Award.

Both Mrs. Watkins and Dr. Lamb were members of the MCN President’s Administrative Council and were instrumental in facilitating the transition of MCN into Illinois State University. Having spent the majority of their careers at Mennonite College of Nursing supporting the development of students and mentoring student leaders, they have chosen to continue to support student leadership with this annual scholarship.