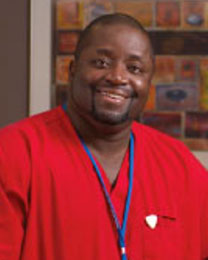 Eric Tapley was recruited to Illinois State University from Harper High School in the southside of Chicago to play football. He was a three-year starter, and graduated in 1983 with a degree in physical education. He later pursued a second degree at Mennonite College of Nursing. He received a Bachelor of Science in nursing in 1997.

His attitude was always helping – his patients, co-workers, family and friends. He was described as extraordinary, amazing, fun, loving, genuine and always positive. His amazing never-ending smile could light up any day.

The significance of music and service in Eric’s life was a reflection of the love he had for his family, his friends and life.

Eric was an enthusiastic nurse who fostered camaraderie among his fellow nurses and emergency team. He always put the patient first and never grumbled when the work was busy, difficult or sad. He just worked harder. He will be missed for his laughter, smile, colorful scrubs but most of all his heart. With fondness and respect, we establish the Eric Tapley, BSN – Heartland Emergency Specialists, LLC Scholarship in his name.