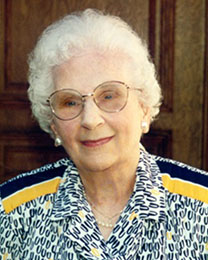 Clara Ummel Stutzman was born on September 5, 1899, and died on May 4, 1994. She graduated from the Mennonite School of Nursing in 1923 and also attended Bluffton College in Bluffton, Ohio. She married Clarence Stutzman in 1926. He died in 1928. They had one son, Dr. John C. Stutzman, of Normal, Illinois, who is a retired urologist. Clara married Earl Stutzman in 1934. He died in 1977. They farmed near Carlock, Illinois, and had one son, James R. Stutzman, who was killed in a farm accident at age 16 in 1952.

Through her life, Clara Stutzman was involved in the activities of the Carlock Mennonite Church, Home Bureau (now Home Extension), Home Sweet Home Mission, Mennonite Hospital Auxiliary and Thrift Shop. She had a continual abiding love for the Mennonite Hospital School of Nursing. Clara Stutzman always showed concern for those in need. During her life she often cared for neighbors, who were ill, in their homes and assisted in home births of rural mothers.

The purposes of The Clara Stutzman Endowed Scholarship Fund are to reduce the financial factor as a determinative factor in a prospective student’s decision to enter nursing education and to promote a spirit of brotherhood, sharing, and servanthood towards mankind.