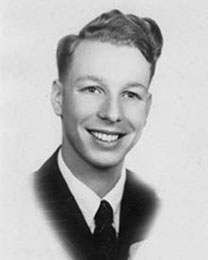 The Paul Stoddard Endowed Scholarship at the Mennonite College of Nursing was created by Alma Stoddard in 2006 as a living memorial to her brother Paul. Alma and Paul were very close as children. Alma admired her older brother, and they shared common interests, especially music. One day when they were young and leaving church, Alma recalls a woman saying to her children, “Why can’t you be like the Stoddard children? They never fight or argue.”

As children, the Stoddards were taught to share and save. Each week they received a weekly allowance of a penny for each year of their life. For example, at six years of age, they received six cents a week. The six cents were divided into three banks — spend, save and give.

Paul and Alma were born and raised in southeastern Nebraska. Paul was interested in the work of the church and considered entering the ministry. Music was a very important interest in his life, and both he and Alma played the clarinet. He attended Nebraska Wesleyan University, where Alma chose to follow. Later he attended Peru State Teacher’s College. During high school and college, Paul was a leader of the young people of the church. He was the choir director and sponsor of the Youth Group. He was known to get along with everyone, the older people in the community as well as the youth.

Paul suffered from a chronic disease while in college, and in spite of diligent care by his mother and medical professionals at the Mayo Clinic, he died at the age of 24. Because he died so young, Alma chose to establish this endowment to honor him, and to help others live a long and healthy life.

The funds from the proceeds of The Paul Stoddard Endowment may be used at the discretion of the dean of The Mennonite College of Nursing to help the College in any way to perpetuate the education of caring nurses who provide excellent clinical care.