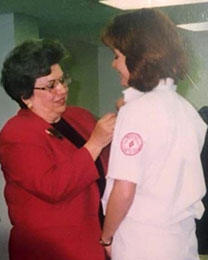 Joni Smith at her Pinning Ceremony

Joni Smith’s mother is an RN. Her great-grandfather was a physician who believed in learning and serving. When Joni started at MCN, she was a young mom recently married. Everyone created a close-knit group that helped her succeed. She dropped her baby off at the dorm during class and the girls watched her. Sometimes she took her daughter to class, where she was used as a patient to learn milestones. The family reaction was a gift that helped her excel.

After two years of ICU nursing in Central Illinois, Joni worked at Rush University SICU. She completed an MSN in nurse anesthesia in 2000 and has since worked in under-served areas with an array of cases/patient populations. Her career has allowed her to serve in a variety of ways. The understanding gained can’t be quantified by medical learning knowledge alone.

Joni’s idea of nursing changed while at MCN. She once believed it was a task-oriented career of injections, medications and patient care. In the years to follow, she learned nursing evolves with time and through experiences. It becomes about the privilege of being present in another’s life. While tasks are done with highest-level learning, the gift of nursing permeates your entire life. It is often a gift nurses don’t realize they have received and one that deepens each passing year.

Joni received scholarships from MCN and the American Business Women’s Association. They were appreciated because she did not have funds to her education. This is one reason she is giving back. She is also grateful for the gift of time and talent from her MCN instructors and college peers who served Joni and her family.

Joni Smith at her Pinning Ceremony