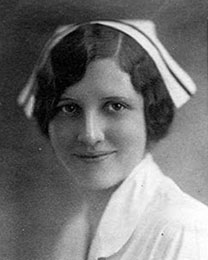 LaRue Augspurger Sloan was born November 5, 1904, in Pulaski, Davis County, Iowa. She was one of nine children raised on a working farm. LaRue Sloan was a teacher in Iowa after her graduation from high school. She enrolled in the Mennonite School of Nursing, graduating in 1928. LaRue Sloan was a surgical nurse until her marriage to Dr. Guy Sloan, and assisted Dr. Guy Sloan after her marriage to him. At the time of her death in 2002, she proudly proclaimed herself to be the eldest surviving graduate of the Mennonite School of Nursing.

LaRue Sloan was a wonderful mother to two children, Guy Hadley Sloan and Jean Sloan Deneen, marvelous grandmother and great-grandmother, incomparable mother-in-law, beloved sister, and terrific aunt and great aunt. She was a mentor and source of guidance to countless persons. LaRue Sloan’s friends were innumerable, from all generations, in Davis County, Iowa, and McLean County, Illinois, at her church, and at the Westminster Village retirement community. LaRue Sloan enjoyed the good company of others and playing Scrabble, bridge, gin rummy, and Flinch, with family and friends, remaining competitive until her death at age 97. LaRue Sloan’s positive attitude was infectious. She had a kind word, warm smile, and encouragement for all who knew her, especially in times of need.

The purpose of the LaRue Sloan Scholarship Fund is to provide financial assistance to one or more students, preferably from a rural background, of the Mennonite College of Nursing at Illinois State University, who have committed themselves to obtaining a degree in nursing, demonstrated strong academic achievement, and participated in community service.