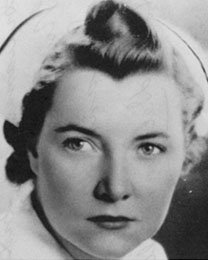 Rachel Rogers Schilling graduated from Mennonite School of Nursing in 1942. Upon graduation, she worked at Mennonite Hospital. Later she worked at the Gailey Eye Clinic.

Due to her husband Roy’s work, they moved to Oregon for seven months. Upon their return, Rachel was hired by Decatur Hospital, where she worked as an intensive care nurse for 17 years. She and Roy had two children, Susan and Mary.

She continued nursing as her children were growing, working from 3 p.m. – 11 p.m. when they were young, and then from 7 a.m. – 3 p.m. once they entered school. Rachel enjoyed nursing, especially when her position involved direct patient contact.

Later, she volunteered for many years with the Red Cross Bloodmobile. Rachel took great pride in her work as a nurse and in all that she endeavored.