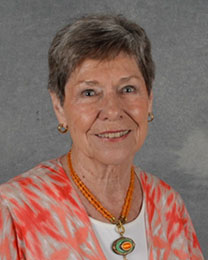 Phyllis grew up in Danvers, Illinois, graduated from Danvers Community High School in 1951, and entered directly into Mennonite School of Nursing. She graduated in 1954.

Upon graduation, Phyllis and a classmate traveled to Atlanta, Georgia, where Phyllis worked for three years at Emroy University Hospital as an Operating Room Nurse. She moved to New York City in 1957 and enrolled in an Operating Room Post Graduate Course at PolyClinic. Upon graduation she continued her career at Cornell University New York Hospital in the operating room. Then, she spent several years working as a nurse in the research lab.

In 1966, upon the recommendation of a physician colleague, Phyllis transitioned from operating room to Corporate Healthcare and was employed by Exxon Corporation in New York City as an occupation health nurse. She later moved to Dallas, Texas, with the company as the corporate nurse until her retirement in 1997.

Phyllis has enjoyed the many stages of her life, always remaining close to her family and her Mennonite School of Nursing classmates. Her hope is that through this endowed scholarship, the College will be able to provide assistance to students where that support is most needed.