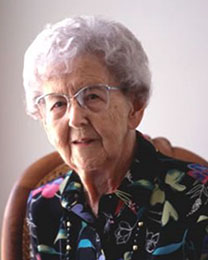 Anna Ropp was raised in Missouri and left home in 1927 to enroll in the Mennonite Hospital School of Nursing in Bloomington, Illinois. A non-traditional student, Ann had already worked for several years before attending nursing school.

Anna graduated from nursing school in 1931 and began her nursing career as a “private duty” nurse. Working around the clock, she cared for patients with tireless dedication. Anna is best known for her role as relief day supervisor, a position she held at Mennonite Hospital for 22 years. Those who have known Anna professionally are quick to comment about her eye for detail, her ability to run many parts of the hospital operations, her high level of energy and her ever present black book. Some say that the location and status of every patient and every bed was dutifully recorded in Ann’s black book, and everyone respected it, as well as its author.

When Anna’s work day ended, it began again at the family farm. Her perfection extended to her care for her family and home. Anna was known as an outstanding cook and baker, gardener and neighbor. Those who lived close by occasionally requested her nursing care and kindly called her “Doc.” Anna actively served her church and community.

When Anna retired in the early 1970s, health care was beginning to undergo major changes. Some say that the hospital had to hire 7 nurses to replace the energy, skill, care and experience that Anna provided. She continued to volunteer until she was in her late 90s as a charter member of the BroMenn Service Auxiliary.

Anna embodies the finest qualities in a nurse. Her dedication to nursing, her family and community are unwavering. Her commitment to excellence in every area of her life inspires respect of those around her. She demonstrated care of the whole person throughout her life, an idea that is at the very root of what it means to be a Mennonite College of Nursing graduate.

The Anna Ropp Scholarship Fund was created in 2004, funded initially with birthday gifts given in celebration of Anna’s 100th birthday, and later with memorial gifts given by many dear friends and family. The sons of Anna Ropp intend to complete the endowment through family gifts as funds permit.