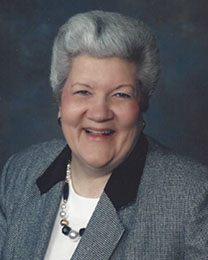 Elfrieda Landes Ramseyer is a preacher’s kid. She grew up in parsonages from Philadelphia to Chicago to Deer Creek, Oklahoma, where she graduated from high school in a class of 12.

Though her mother and two aunts were nurses, Elfrieda always answered the question, “Are you going to be a nurse when you grow up?” with a strong “no.” Yet after majoring in social work at Bluffton College (now Bluffton University) in Ohio, she found she wanted to work more closely with people than in an office, so she chose to attend Mennonite Hospital School of Nursing (MHSN), graduating in 1958.

During her time at MHSN, all students attended Illinois State University in Normal for basic coursework. Students worked what was called a split shift, caring for patients from 7 to 9 a.m., catching a bus to attend classes the rest of the day at the university, and returning to the hospital to work from 4 to 9 p.m. Also, during affiliations, MHSN students frequently felt more prepared and able to adapt than students from other schools of nursing. Thanks to the foresight of MHSN leadership, students could transfer credits if they chose to obtain a baccalaureate degree. Elfrieda received her Bachelor of Science in nursing and later went on to earn her master’s in rehabilitation counseling from Bowling Green State University in Ohio.

Elfrieda’s professional life included working as a charge nurse and supervisor at various medical centers, as an office nurse after her children were born, and later as a nursing instructor for 15 years at a community college, serving as acting director for some of that time. She also worked for a national healthcare corporation as an education coordinator.

Elfrieda spent the last 10 years of her career operating her own consulting business, EMR Associates, developing and presenting curriculum focused on leadership, conflict, assertiveness and the value of choice. She presented at venues such as nursing conferences, national NCLEX reviews and women’s retreats, to name a few. She also obtained her provider number through the Iowa Board of Nursing, allowing her to grant CEUs to nursing participants.

Growing up in a family where service was a major value, Elfrieda has spent considerable time in voluntary service in many parts of the country. She continues to volunteer for community and church projects and has tutored in local elementary schools, worked at a local thrift shop, and volunteered weekly with the Salvation Army.

The scope of Elfrieda’s contributions to higher education and service led her to be awarded the Distinguished Service Award from Bluffton College and the Distinguished Alumni Award from Mennonite College of Nursing (MCN). She has given commencement addresses to nursing students and made a presentation to the MCN. Elfrieda remains active in her own personal and professional growth. Elfrieda believes that Mennonite College of Nursing continues to produce excellent nursing leaders, ready to go into any workplace, no matter where, and be productive. What an exciting time to be preparing for a career that offers so much opportunity!