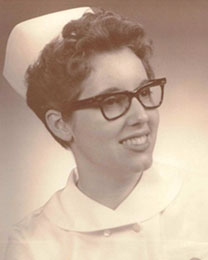 Karen Griffith Parker was born June 8, 1940 in Galesburg, Illinois to Harley and Marian Griffith. She was the younger of two children. Her family lived and farmed in rural Knox County. In the spring of 1954, Karen was diagnosed with type 1 diabetes. She graduated from Galesburg High School in 1958. Karen was presented with the opportunity of a scholarship, so in the fall of 1958, she entered Cottage Hospital School of Nursing. During this tumultuous time in our history, when black and white students were separated in the dormitories, there were three black students in her class. Karen volunteered to room with a black student because this student would not have been able to attend if no one agreed to room with her. This was one of many examples of how she welcomed everyone into her life and heart. She graduated from Nursing School in May 1961, started her career at Cottage Hospital, and received her RN designation in September the same year.

Karen married John Parker in February 1962, and they relocated to Springfield, where she was employed at Memorial Hospital. She advanced to Assistant Head Nurse of their new Intensive Care/Recovery Room Unit.

In June 1983, she left hospital nursing to perform life/health insurance exams, which allowed her a more flexible schedule for her family and stress reduction for her own health. In September 1988, she officially retired from nursing due to health issues related to her lifelong battle with diabetes. In December 1989, Karen underwent her first vascular surgery to restore and maintain her circulation to her lower right leg. She continued her battle and survived numerous vascular surgeries including triple bypass. In April 2004, Karen was hospitalized for over five months. Due to her weakened condition from infection and failure of her gastric system, Karen lost her lifelong battle with diabetes and died due to heart failure on September 13, 2004. Surviving are her husband, John, and daughters, Penny (Marc), Julia (Keith), and Cindy (Randy). Since her death she has two grandchildren, Elijah and Katelyn.

Karen was a very courageous person. She lived her life to the fullest despite her affliction with diabetes and encouraged others to do the same. She endured five pregnancies and the loss of two full-term babies. Throughout her life she was a loving, caring, compassionate, and fun wife, mother, friend, and caregiver. Karen never met a stranger; everyone was welcome. She was a collector of many things. She loved antiques and collected invalid/infant feeders and other medical memorabilia that are on display at Mennonite College of Nursing at Illinois State University.

Although Karen did not choose nursing, nursing chose her with a scholarship opportunity. The Karen Griffith Parker Scholarship was established in 2007 by Karen’s daughter, Julia Smith and her husband, Keith. Her daughter, Julia says “I can think of no other career that would have allowed her to show her caring and compassionate heart than nursing. Nursing led her to meet and establish lifelong friendships and touch the lives of many. I can think of no better way to honor her life and memory than establishing this scholarship. What started with a scholarship continues for others with the same opportunity that was given to her; I hope the recipients make the most of it as she did.”