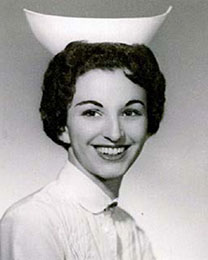 Bobbie McCambridge was born September 13, 1939. As a young child during WWII, she lived on a government farm where her father was the manager and her mother was the accountant. After attending high school in Hillsboro, Oregon, she chose to attend nursing school, a decision greatly influenced by her own mother's battle with cancer. During this time a drunk driver hit the automobile she was driving, resulting in devastating injuries to herself, her brother, her mother, and to the death of her sister, Mary Jo. The number of broken bones that Bobbie sustained was so extensive that she spent months in a hospital bed, unable to move. She was told she would never walk again. Not only did she prove them wrong about that, every one of her children represented something she was told she could never do. Finally, and maybe most impressively, she graduated as a diploma nurse on time in 1959. As a nurse she worked in psych, obstetrics, and women's surgery. She also worked as an office manager/head nurse for an ob/gyn practice.

She was a funny, sarcastic, fearless, and powerful woman. She was known for many quotable quotes, some not appropriate for public consumption, and one of my favorites is, "You never pick a battle unless you're 100% sure you're right." If she were alive, she would be irritated at the telling of her story, which she would find ordinary and not worth mentioning. However, I disagree, and am 100% certain I am right.

Bobbie McCambridge's story is one of a life where difficulty, loss, hardship and health issues could have dragged her down or made her stronger. The secret to her success lies in the choices she made each day to go forward. As my mother, she was one of the most influential people in my life. This scholarship is for those of you who have not had an easy path and have experienced your own battles, but have refused to let those difficulties define you. Bobbie would be proud to know there are nurses today that she has helped. I hope your love of nursing will manifest itself into excellent patient care; and regardless of what obstacles you encounter along your life's path, may you always move forward toward the achievement of your goals.