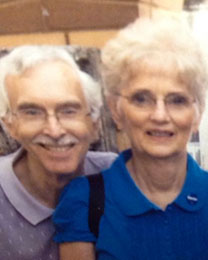 Betty and Ron Kinser joined the Illinois State University family in 1965 after Ron became a candidate for a Master of Science degree in English, which he earned in 1966, having completed his thesis, “Uses of Religion in John Dryden’s Absalom and Achitophel.”

The Kinsers and their two children, Brent and Kris Anne, moved to Normal in 1967 when Ron became an instructor in the Department of English. Ron taught at the University until 1973 when he left to become a teacher and later an administrator for the Illinois State Department of Corrections. He retired in 2001.

Betty earned her bachelor’s degree in Art Education in 1973 and her master’s degree in Art Education in 1975, both from Illinois State University. After she graduated, she took a position as a public school teacher but returned to the College of Fine Arts as a lecturer in 1977. During her career at Illinois State, she served many roles in the Art Department. She taught in nearly every medium offered and served as advisor for more than 500 art, music, and theater majors. She served on numerous University committees, including Educating Illinois and the Administrative Professional Council. She also sponsored and served as fiscal agent for several registered student organizations. In 1999, Betty received the Herb Sanders Award for Outstanding Advising. She retired in 2005, and since 2006 she has served as a Trustee of Illinois State University, a role she continues to play with great distinction and pride.

Betty’s involvement in the life of the University has been transcended only by her work in the community. She has served as a leader of the League of Women Voters, Easter Seals, Midwest Food Bank, McLean County’s Light the Night Walk, and innumerable other causes. In 2007, she was named by the YWCA as a Woman of Distinction in McLean County and by the Town of Normal as The Citizen of the Year.

In 2008 Betty suffered a severe aortic dissection, types A and B, from which she miraculously recovered. At that time, Ron had already been diagnosed with early onset Alzheimer’s disease, from which he succumbed on July 24, 2013 after a heroic struggle, both on his part and on hers. To the end, Betty demonstrated great courage as his primary caregiver. A bright light during their stays at Advocate BroMenn Medical Center was the constant presence of Illinois State student nurses, who gave Betty and Ron tireless care and resolute hope through difficult times.