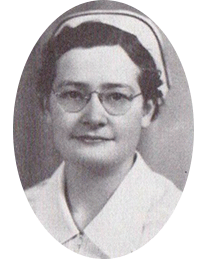 “I watched the nurses as they cared for me when I had my appendix taken out. Nursing was something that immediately appealed to me.”

Her father was an encourager and was a huge influence on her career choice to attend Mennonite Hospital School of Nursing. He would send those in her family who had injuries or illnesses to her so she could care for them. He would tell her that she would make a great nurse.

It was a sacrifice for Lois to attend nursing school because she was needed at home to help her family. She valued her education.

“From working in many areas, I often found myself looking back at my training from Mennonite and finding myself filled with happiness because I learned how to gain my patients’ trust and make them comfortable.”

“Concerns and conversations were always about her younger siblings…that was part of who she was-always wanting to help others, both at home and at work.”

In June 1973, Kaufmann moved to Florida to “retire” and work in a hospital emergency room. She retired again after working in hospice for several years. “I wanted to give my heart to the patients,” she said. The nurses at the hospice unit where she last worked ultimately took care of Lois at her life’s end.