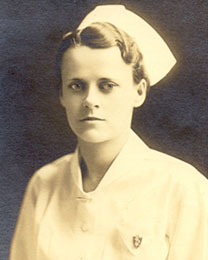 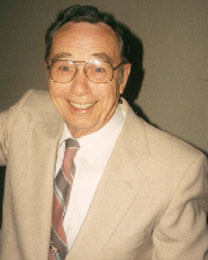 Mary Ellen Wilfley was born on February 4, 1911, in Callaway County, Missouri. She had a twin, Lucy Eleanor, an older brother, John Joseph, and a younger brother, Robert Lee. When Mary Ellen and Lucy were three years old, their father died.

Shortly after her father’s death, a Callaway County social worker visited Mary Ellen’s mother to propose putting the four children in an orphanage. Even though they were poor, her mother refused to accept this proposition and emphatically rejected that as an option, believing with all her heart that with hard work and determination, she could keep her children and preserve their life together — and she did. They raised pigs, cows, chickens, and gardened. Every fall, the family butchered pigs and canned enough meat and sausage to eat during the year. They also canned enough fruit and vegetables for the year. For cash, they sold milk, eggs, and fresh vegetables to friends and neighbors. They didn’t have many material possessions but never went hungry.

They had a horse and buggy to use when they needed to go to town — Fulton, Missouri, several miles down the road — but to go to school (2-3 miles away), Mary Ellen and her sister and brothers walked. For lunches, they took cold sausage and biscuits or cold gravy sandwiches.

Mary Ellen was left handed, and in the public schools in those days, this was not acceptable. Every time Mary Ellen would write with her left hand, the teacher would hit her knuckles with a ruler and make her switch the pencil to her right hand. (She always said that her writing looked like “chicken scratches” because of that.) As a result, Mary Ellen never liked school and was not very successful.

In 1928, Mary Ellen’s junior year at Fulton High School, she was offered an opportunity to become a nurse’s aid at the Callaway Hospital in Fulton. She was given room and board and a small stipend in exchange. Mary Ellen accepted this, and that was the beginning of her passion for nursing. She adored this work and excelled. After graduation from high school, Mary Ellen was offered a scholarship for nurse’s training at Jewish Hospital in St. Louis, Missouri. She was an outstanding student nurse and graduated in 1933, eighth in her class. After graduation, Mary Ellen returned to work at the Callaway Hospital, receiving free room and board in their dormitory and earning about $40.00 per month. Every month she sent $10.00 of her salary home to her mother and later helped pay for her twin to also go to Jewish Hospital for nurse’s training. (Lucy, too, became a Registered Nurse and made a lifetime career as a surgical nurse in western Kansas.)

Nurses living in dorms were not allowed to marry, but Mary Ellen had met Curtis Griggs, who was to be the love of her life. They secretly married in 1938 and celebrated their 60th wedding anniversary shortly before she passed away.

In 1940, Carolyn was born. Mary Ellen continued to work at Callaway Hospital, but in 1944 when second daughter, Joyce, was born, Mary Ellen quit nursing to stay at home. From that point forward, she was an avid volunteer nurse for many organizations, particularly the American Red Cross.

Probably as a result of her background, Mary Ellen was frugal and a tireless worker. Her daughters say, “She could work circles around us, even when she was 80!” She sewed dresses for herself and Joyce and Carolyn, recovered chairs and sofas, made quilts, etc. One of her favorite sewing creations was the full nursing uniform, complete with dress, cap, and blue cape that she made for her granddaughter.

In 1962 when Joyce left for college, Mary Ellen decided to go back to full-time nursing, but with a different direction. She became a school nurse for the women of William Woods College in Fulton. Later, her position transferred to school nurse in a new combined infirmary for the men and women of Westminster and William Woods Colleges in Fulton. She formally retired in 1972. Mary Ellen had loved her profession. Even though nurse’s clothing had changed, she always wore her traditional uniform, white nylons, white shoes, cap, and pin. She was so proud of them.

Mary Ellen and Curtis loved the out-of-doors. They owned a house at the Lake of the Ozarks in Osage Beach, Missouri, where they were avid boaters, fishermen, swimmers, and skiers. (Mary Ellen continued water skiing until her mid-70’s.) They also loved their small vegetable and flower gardens and birds, particularly hummingbirds and purple martins.

Mary Ellen was so caring and nurturing that her daughters used to tease her that she was never happier than when they were sick and she could step into her nursing role at home. She loved to take care of her family and friends and would do anything for them. Mary Ellen Wilfley Griggs died in 1998 at the age of 87.

William Junior Morlan was born on June 23, 1923, in Chanute, Kansas. The summer Bill was nine years old his father died. As a child Bill delivered produce and chickens to grocery stores. Bill remembered having to skip school many times in order to do odd jobs to support the family.

Bill attended a church school for only a short period of time before going to work on a ranch in Coffey County, Kansas. He also worked at a Civilian Conservation Corps camp in western Kansas. Bill enlisted in the U. S. Navy during World War II. He served on the destroyer U.S.S. Little in the Pacific fleet, fighting in the battles at Iwo Jima and Okinawa. While on picket duty in the East China Sea in April 1945, several kamikaze planes exploded on the ship and it sank in just a few minutes. After seven hours in the water, the survivors were picked up by a hospital ship and taken to Tinian Island for recovery. This was Bill’s first encounter with nurses, whom he appreciated very much for helping him and the other sailors to recover.

After the war Bill returned to McPherson, Kansas, where he worked at Seymour Packing Plant and then for the McPherson Sentinel as a pressman. Later he moved to Lawrence Kansas where he worked for Kansas Color Press and the City of Lawrence. He retired in June of 1985. After retirement Bill moved to Chanute, Kansas, where he served on the City Commission and served as Mayor for two years. He also served on the Southeast Kansas Regional Planning Commission.

In June of 1997 Bill suffered his first stroke. Bill spent the last years of his life under the care of the nurses at the Wesley Medical Center in Wichita. He attributed the wonderful years of life after his stroke to those nurses. Bill died on April 14, 2004, in Wichita, Kansas.