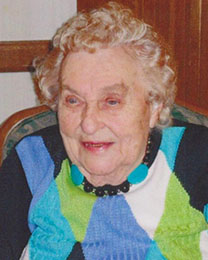 Mary Rudelle Hussey Goodwin was born and raised in Illinois. She graduated from Bloomington High School in 1929. In 1933 she married Harold Goodwin of Paxton, Illinois. They had one daughter, Damaris (Dee) Goodwin, who passed away January 25, 1995.

Rudelle has been a life-long leader and volunteer. Many groups have benefitted from her services. Her past volunteer efforts include:

Rudelle is presently a volunteer at the Property Owner and Residents Association (PORA), and a Hostess at the Visitors Center of Sun City West, Arizona.

In December 2000, Mary Rudelle Goodwin established the M. Rudelle Goodwin Nursing Scholarship Fund for the Mennonite College of Nursing at Illinois State University. It was Goodwin’s concern for the nursing shortage and for nursing care that led her to establish this fund.