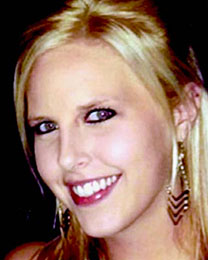 As a three-sport athlete (volleyball, basketball, and softball), Emily had a competitive side and loved being active. She focused on volleyball her last two years in high school, earning All-Area and All-Conference honors.

The one characteristic that was often initially overlooked when meeting Emily was her fierce determination to achieve goals and meet challenges. Emily’s biggest goal was to become a registered nurse, though it would prove to be a difficult journey. Emily was not pre-admitted directly to the nursing program at MCN out of high school. During her new student orientation at Illinois State, she was told by her academic advisor that she might have to consider another major because of the limited availability in MCN. She would need to earn straight A’s her first two years at ISU to be accepted. True to her character, she met that challenge while also being an active member in the Tri-Delta sorority.

A tough job market greeted Emily upon graduation from MCN, but she was determined to be self-sufficient. Emily worked part-time as a grocery store cashier and also as a teacher’s helper in an after school program while she sought her first nursing opportunity. She landed a job at the hospital where she was born - in the acute rehabilitation unit of The Community Hospital in Munster, Indiana.

After gaining a year of experience, she realized another goal — working as a registered nurse at a major Chicago hospital, Northwestern Memorial Hospital. Emily worked in the observation unit for 2 1/2 years, and had recently transitioned to the GI Lab. During that time she made the move to Chicago, and throughly enjoyed the constant activity the big city offered.

Surrounded by advanced medical care, Emily still believed the best medicine was a warm smile and words of encouragement. When her hiring managers were asked why they chose her, they answered all the same: they were drawn to her professional skills, smile, lively personality, and infectious energy. Her co-workers said her patients never left the unit without giving her a hug. But a fateful day in August 2014 changed everything. Emily was critically injured in an accident. She was placed in a drug-induced coma to try to stop the swelling in her brain.

She always believed that a nurse was the patient’s best advocate, and that every patient deserved dignity and respect. The nurses around Emily became her advocates. Even though Emily may not have been able to hear or understand their words, her nurses, doctors, and other members of her health care team introduced themselves each time they entered her room and explained procedures/tasks to her. They also made sure her dignity was not compromised by maintaining her privacy during treatments. The family was impressed with the compassion and commitment that Emily’s co-workers demonstrated as they cared for her.

Emily Anne Fredbloom was called to heaven after a courageous three week battle on September 19, 2014, two months before her 27th birthday.

Emily’s family was always very proud that their daughter chose such a noble profession. However, after sitting at her bedside 24 hours a day and seeing the care she received, they came to consider nurses as “earth’s angels.” Throughout their personal tragedy, they had the privilege of hearing how their daughter touched lives — more lives than they could have imagined.

The Fredbloom family wants to continue Emily’s exemplary work and hopefully relieve stress by providing scholarship assistance to future Mennonite College of Nursing students who embody Emily’s passion for life, nursery and care for others.