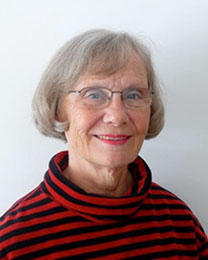 Jana L. Edge grew up in rural southwest Wisconsin and attended the Methodist Hospital School of Nursing in Madison, where she learned the importance of being grounded in “The Art of Nursing” ­— the understanding of meeting the physical, emotional and spiritual needs of the patient. A beloved nursing instructor, Jana began class each day with “Who are you here to serve?” and the response was always “The patient.” In gaining understanding of “The Art of Nursing,” Jana was able to see that the healing touch of an attentive nurse assisted with pain management, lessened patient anxiety, provided courage, and increased faith in recovery.

Jana received her diploma from Methodist Hospital School of Nursing in 1960. She relocated to Illinois when her husband Orlyn was hired as an associate professor of mathematics at Illinois State Normal University, and it was here that she completed a bachelor's degree in Social Work in 1990.

The lessons in “The Art of Nursing” served Jana well as the profession saw may changes throughout her career, and she saw that one must go forward or be left in the dust. Jana worked at Mennonite Hospital, which later became Advocate BroMenn Medical Center. She began in labor and delivery, and she continued on to medical, intensive care, post-surgical nursing management, post anesthesia recovery, and bariatric patient education. Jana also pioneered the first parish nurse program south of Chicago.

Nursing taught Jana to always be prepared for the next event and to proceed even when she didn’t have all the answers or a concrete plan. She was a member of a search team for finding a Russian sister city in 1988; Vladimir/Canterbury Sister City Association of Bloomington/Normal was formed. In 1992, a request for humanitarian aid from Vladimir was received. Jana was asked to lead this effort but declined because she had no international experience in health care. After receiving additional requests to participate including being asked by the Russian Campaign with Physicians for Social Responsibility: Development for Democracy, she finally agreed. "The Art of Nursing” again was applied to the task. She determined exactly what the Russian health care professionals were requesting, gained local community support, wrote grants, and ordered airplanes and shipping containers, all while being responsible to timelines.

That single event evolved into more than 35 exchanges of medical professionals. Some of the outcomes from these exchanges included a new curriculum for a Russian nursing college and city-wide education experiences promoting healthy living, education mentorships and the introduction to physician-nurse co-operation. Russian nurses had an opportunity to see that with continued education and professional behavior their professional position in society could also improve.

In 1993, Jana received McLean County’s “Women of Distinction Award” and the Town of Normal’s “Martin Luther King Human Relations Award” in 2000 celebrating her many efforts. Jana believes that it is extremely important for nurses to have a cross cultured experience because it is only then that we can evaluate domestic nursing practice and attempt to understand that of the rest of the world.

Jana is grateful that nursing has given her the opportunity to take risks and provided her with the tool kit for success. She believes that as nurses step outside their comfort zone, they can grow and learn to fly.

By establishing the Jana L. Edge Endowed International Transcultural Nursing Scholarship, Jana will assist nursing students who have the opportunity to travel internationally, and thereby, see nursing from an outside perspective and learn to thrive outside their comfort zone.