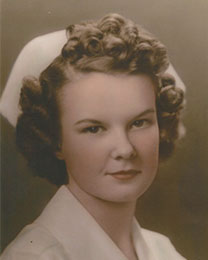 Esther was a nurse, and always very proud. She worked diligently her entire life, first on the family farm, and later helping with the oil business and motel business ventures.

She raised two sons and taught them to work hard and to be fair with all their great employees and friends throughout the years. Her sons remember the many years she also worked as the nurse at the Illinois State Fair.

Even in her last months of life, one of her most treasured possessions was her nursing pin. This scholarship was established by the Brock family in honor of their mother In 2008.