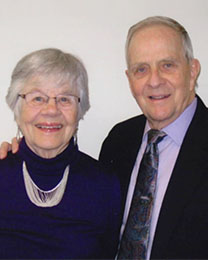 Ralph Bellas joined ISU’s English Department in 1965. During the 1970’s, he served as director for three student groups to Brighton, England, in the international exchange program. Although retiring in 1979, he served on two more occasions in the 1980’s as student director of ISU’s program with Nansan University in Nagoya, Japan. Among his publications is Mennonite College of Nursing 1985-1995: The Flame Burns Brightly.

Prior to coming to Mennonite School of Nursing, Louise Bellas practiced nursing in several U.S. cities. Public health nursing was her area of interest and expertise. She taught at Mennonite from 1972 to 1985. She was in England in 1974 to arrange an international student exchange program between Mennonite and the Royal Sussex County Hospital in Brighton. Her publications focus on her nursing experiences.

The parents of three sons and three daughters, Ralph and Louise volunteered in the U.S Peace Corps in the Fiji Islands, South Pacific, while Louise taught at the Fiji School of Nursing. They have traveled extensively in the U.S. and many foreign countries. Their commitment and contributions to Mennonite College of Nursing were acknowledged in 2009 when they received the Mennonite Nurses Organization Service Award.

Ralph and Louise Bellas established this scholarship in 2015 in order to assist students wanting to participate in international nursing exchanges, where they could experience medical technology, treatment, and patient care within different culture settings.