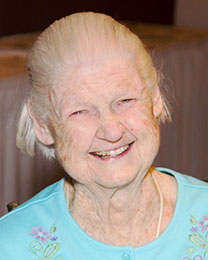 At some time during everyone’s life, as I did, there is a need for the loving care of trained nurses. –Vivian O. Stockdale

From her years of hospital experience and hearing of the shortage of nurses, Vivian O. Stockdale felt there was a need for aid so students could finish their education in the field of nursing. In November 2001 she established the Vivian O. Stockdale Nursing Scholarship Fund as a means of supporting the profession and perpetuating her desire to provide care for others.

Vivian O. Stockdale was born and schooled in the area of the Illinois farming community of Sibley. In 1944 she enlisted in the WAVES. After a short training period at a Bethesda, Maryland, hospital, she spent four years performing nursing duties at several naval hospitals in California. In 1950, she was recalled for 18 months for the Korean Conflict. In 1952, she returned to Bloomington where she worked in the accounting department at Ralston Purina until her retirement in 1983. Since then she has been involved as a volunteer for the Red Cross Bloodmobile program.