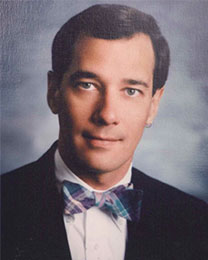 Dr. Brett J. Cassens was born in Sterling, Illinois, and graduated from Illinois State University in 1972. He graduated from the University of Illinois-Rockford School of Medicine in 1976 and also received a master of business administration from The Wharton School, University of Pennsylvania in 1981. He was president and medical director from 1982 to 1985 of Jefferson Health Care in Philadelphia. He also served as an instructor at the University Of Illinois College Of Medicine and as clinical professor of Medicine at Thomas Jefferson Medical College in Philadelphia.

Dr. Cassens moved to San Diego, California, where he became one of the first physicians in the area to treat Acquired Immune Deficiency Syndrome (AIDS). “Brett was one of the leaders in HIV care in the early days,” said Dr. Keith Vrhel of the Park Center for Health in San Diego. “He cared for a large number of patients with HIV, and he was an extremely compassionate, understanding physician.”

Dr. Cassens continued his work in the AIDS field as a research associate in the HIV Neurobehavioral Research Center and at the AIDS Treatment Evaluation Unit, both at the University of California – San Diego. An AIDS activist, he was co-chairman from 1988-1989 of the AIDS Task Force in San Diego. He also had been both national president and president of the San Diego chapter of the American Association of Physicians for Human Rights, a group of gay and lesbian physicians and medical students.

He died November 7, 1996, at his home in Hillcrest, California. He was survived by his parents, John and Lois Cassens, his sister, Laurel Myers, his brother, Gary Cassens, and his companion, Don Stille. This scholarship, in Dr. Cassens’s memory, was established through Memorial gifts made by family, friends, and colleagues, and through a testamentary gift from the Cassens/Stille Trust.